A Republic of Georgia soldiers stands in formation during a ceremony marking the historic deployment of the Republic of Georgia’s 31st Light Infantry Battalion to support Marine Expeditionary Brigade Afghanistan. (Photo credit: Wikipedia)

…”We talked about Georgia’s role in the peacekeeping operation in Afghanistan. Georgia has the largest mission in Afghanistan amongst non-NATO members. You know that we have already made a statement that Georgia will remain in Afghanistan after 2014. We asked Germany to actively support Georgia’s integration into NATO. The Deputy Defence Minister once again confirmed that the resolution adopted by the Bundestag is in force,” Panjikidze said…. (more)

Baku: Azerbaijani peacekeepers will also be withdrawn, after NATO officially ends its mission in Afghanistan by the end of this year. 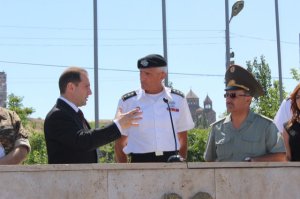 More than 100 Armenian soldiers flew to Germany on Wednesday to take part in training and exercises organized by the U.S. military for nations involved in the NATO-led peacekeeping mission in Kosovo.

The Armenian Defense Ministry said the 116 soldiers will train at a U.S. military base in Germany from August 16 through September 4 alongside U.S., Bulgarian, Romanian, Slovenian and Ukrainian troops… (more)